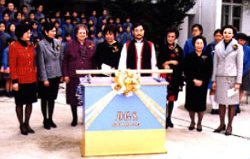 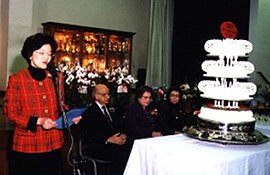 The beginning of the year saw all staff and students busily preparing for the rededication of the School and for Speech Day on 25th January 2000. A school crest was mounted on the facade of the Centenary Hall to commemorate the 140th Anniversary of the School. It was a moving occasion when the Rt. Rev. Thomas Soo presided over the Rededication Ceremony at the school open car park where the whole school assembled to praise God through singing the Te Deum. Past headmistresses, alumnae, parents and friends of the School supported us with their presence. Preceding the Cake-Cutting Ceremony to celebrate the School's 140th birthday, fifteen members of staff who had served the School for at least 20 years received Long Service Awards from Dr. C.J. Symons, the longest serving headmistress of DGS, and Mrs. Grace Mok and Mr. D. Bokhary, two longest serving members of the School Council. 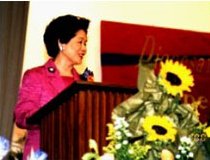 Our Guest of Honour on Speech Day, the Honourable Mrs. Anson Chan, Chief Secretary of the HKSAR, shared a personal reflection on 'How to Play the Combined Roles of a Woman'. The message was very encouraging and pertinent to DGS, us being a girls' school. 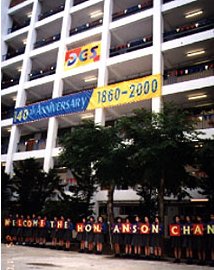 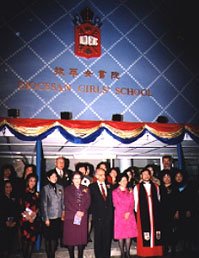